Here’s Looking at You

Here’s Looking at You 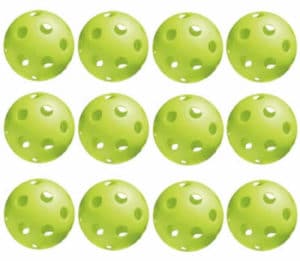 There is not a lot to say about indoor Pickleballs, other than they come in a variety of colors, are softer, last a long time and don’t sound as good as outdoor balls. The lime green Jugs ball is a fine example of a quality indoor ball.

The same can’t be said for the outdoor Pickleball ball. Change is on the way. A new ball is on the court and it wants to be part of the action. This ball will be used in the first US Open Pickleball Championships in Naples, Florida at the end of April.

For years the reliable Dura sold by Pickle-Ball has been the ball of choice; it’s solid, durable, travels well and has an excellent sound made when the paddle strikes the ball. Playing with the Dura is “the sound of Pickleball.” Brash, loud and clunky, it’s music to the ears for any pickle ball player. Much more on the sound of Pickleball in a later blog.

Change for the outdoor Pickleball is via a new ball called the “Neon Flare” that has been introduced by the Wilson Sporting Goods company. It looks like they want to be part of the growing Pickleball action.

Twelve experienced Pickleball players compared the Dura and Wilson balls and came to the following conclusions:

The Wilson ball does have a flaw. Hit the ball hard for a game or two and the Neon Flare would go a bit “out of round.” Let the Neon sit and it returns to its original shape. Most likely this problem will be solved before the US Open Championships.

A major plus for the Wilson ball is that all players testing the Flare liked the bright neon color more than the white, orange and yellow of the Dura balls. This will probably result in some color changes for Dura balls. 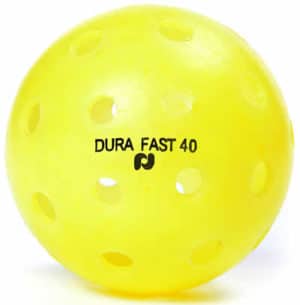 Lastly and most importantly, as far as this blogger is concerned, both balls SOUNDED THE SAME. If I had my back turned to the courts, the audio difference wasn’t noticeable. Keeping the sound of the Dura ball is all important. It is a sad day for any court or Pickleball facility that has to go to a “quiet ball” due to noise complaints. Keeping the ‘ loud Pickleball sound’ should be all important to the game. The level of sound in outdoor Pickleball is one area that needs NO ch-ch-ch-ch changes.

The new batch of Wilson Pickleball balls failed to make the grade and will be replaced by the Dura Pickleball balls in the US Open Championships in Naples at the end of April, 2016. Back to the Pickleball design drawing board for the “Neon Flare”. At least an excellent new ball color was created.