Are you looking for somewhere to play Pickleball near you?  Perhaps you want to meet new people, make new friends or just find a competition to play in.  The best way to to find ‘pickleball near me’, is to follow the instructions below.

There hundreds of clubs to join and thousands of courts all over the US and Canada, but the easiest way to find the closest to you is by following the instructions below.

The USAPA is the official pickleball association in the US and they not only regulate the game and organise tournaments like the US open but they also help connect players to each other and keep a list of over 6000 pickleball courts.

This is the best place to start if you live in the US and will help you find a competitive or casual game to join. Simply click on the image below. 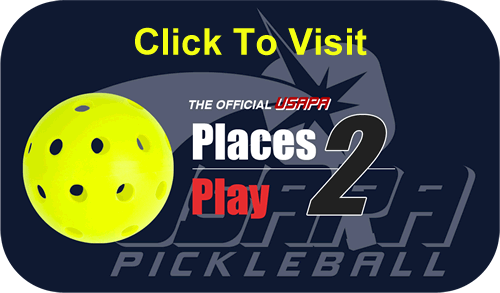 If you live in Canada and are looking for a court or a game, you are not alone!  Canada has lots of pickleball players and courts, but the best way to find a court or game near you is to visit the official Pickleball Canada Organisation which has courts and clubs listed across 13 provinces/territories.

The history of Pickleball is actually quite interesting. Pickleball came into existence as a result of the combined efforts of Joel Pritchard (a US Congressman), William Bell, and Barney McCallum.

In the summer of 1965, these co-inventors of pickleball developed the game to entertain their families, who were getting bored with nothing much to do. The basic idea of playing badminton on Pritchard’s badminton court had to be shelved owing to the lack of a shuttlecock.

This prompted the trio to use a ball, and thus began the crude version of pickleball. The fact that it was difficult to hit the ball with a badminton racket led to the replacement of this racket with a stronger paddle made of wood. Eventually, the badminton net was lowered with the intention of making the game a bit faster, and came into existence a totally new game, which was named pickleball.

The Legend of the Name

The name pickleball was derived from the name of Pritchard’s family dog – Pickle, who had a tendency of chasing the errant balls and hiding in the bushes.

Or it might have been named after a Pickle Boat, but that is no fun, so I am ignoring that likelihood 🙂

David Lester became the first Pickleball champion in the World through the “South-Center Athletics Club” of Washington.

Say it with Me